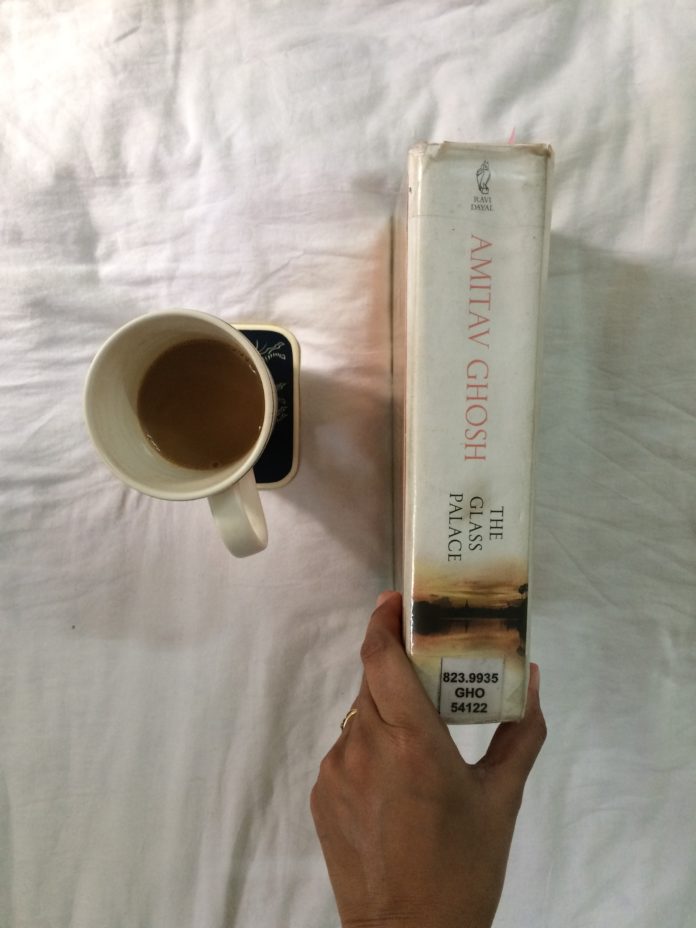 “What would it be like if I had something to defend- a home, a country, a family- and I found myself attacked by these ghostly men, these trusting boys. How do you fight an enemy who fights with neither enmity nor anger but in submission to orders from superiors, without protest and conscience?”

I was introduced to Amitav Ghosh by my uncle and The Glass Palace was my first novel by him. I read this novel when I was 16 and I have been rereading it ever since. It has a permanent place on my bookshelf and in my heart.

The Glass Palace is set in Burma during the British invasion of 1885. It tells the story of a family and the tumultuous history of Burma (Myanmar). Burma is a country ravaged by war for more than fifty years, which only became a delicate new democracy in 2015. The Glass Palace begins with the shattering of the kingdom of Burma and tells the story of a people, a fortune, and a family and its fate. It traces the life of Rajkumar, a poor Indian boy, who is lifted on the tides of political and social turmoil to build an empire in the Burmese teak forest. When the British soldiers send the royal family to exile in India, Rajkumar falls in love with Dolly, an attendant at the palace. Years later, unable to forget her Rajkumar goes in search of his love. This novel is epic in length and covers three generations of Indians from 1885 to the end of the twentieth century.

The complexity of The Glass Palace is astounding. Amitav Ghosh poignantly depicts the struggles of Rajkumar and his family; their struggle for survival through the political and social turmoil. The historical descriptions are so dynamic that I felt I was looking at a montage of snapshots of the myriad sounds, smells, sights and feelings of that period. The key theme of The Glass Palace is colonialism. The characters are oppressed by colonialism, whether it is fighting a war which isn’t theirs or seeing themselves via the prism of subjugation.

The Glass Palace is a great place to begin for those who are unfamiliar with Amitav Ghosh. This novel is very close to my heart and I have read it numerous times. It never ceases to amaze me. The Glass Palace is about human relationships, love and loss; a slow unraveling of memory in the passage of time.